Earlier in the year I came across some wonderful Christmas themed pop up box cards on the Calla Lily Studio blog. Please explore further than the link, Chris has some truly stunning examples that she did last year shown over several posts. I’d love to try the nutcracker and the nativity scene but they look a bit complicated!!

I had to go at some of the simpler ones and here is my ‘angel’ version using papers from Craftwork Cards and various dies I have (the body is actually a bauble die upside down). 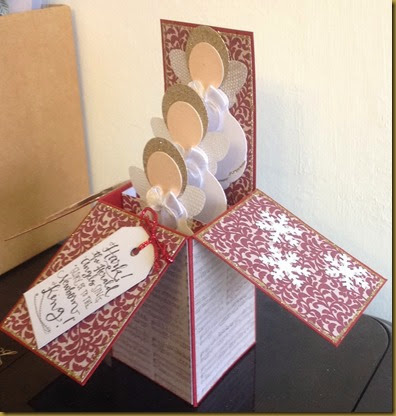 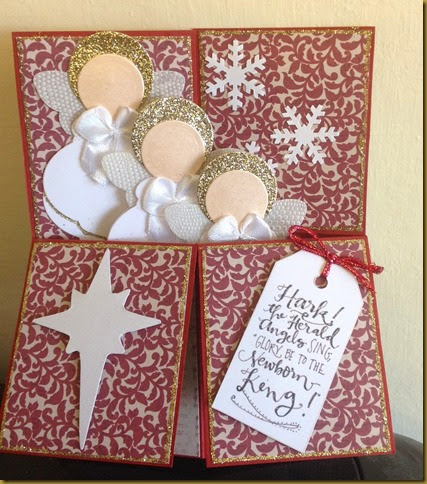 I really like box cards, which I initially saw demonstrated by Julie Hickey of Craftwork Cards but my OCD like nature means that they have to look OK from every angle, open and shut. The flowery ones take me ages to sort out LOL. The three in a line style of these angels gives an acceptable appearance when closed.

But I wasn’t satisfied with that, so have decorated the underside of the flaps and created a belly band (which could be customised) to put on the card when it goes in the envelope. It also means any embellishments don’t get ‘caught’ in the envelope. 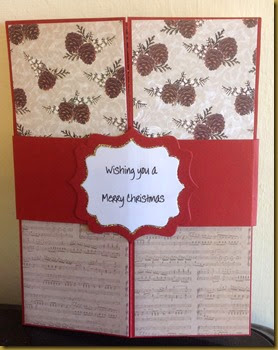 The recipient will probably be incredibly puzzled but I’m happy!! Now I’m trying to think of a way to put folds into the band so that it can be put on the open box. Might look a bit messy though… …. watch this space!!

I really can’t explain how stressed it makes me when things don’t look ‘right’. I remember cutting up a whole bunch of tunnel cards because I couldn’t figure out a way to make them look good when folded for posting. Is anyone else out there as weird as me?

I remember when the "in the box" cards hit. They are so cool but I'm stumped with what to put in the box besides flowers (what I learned). I've since learned you can really put anything you want in the box. Angels did not cross my mind though. What a sweet choir of singing angels!