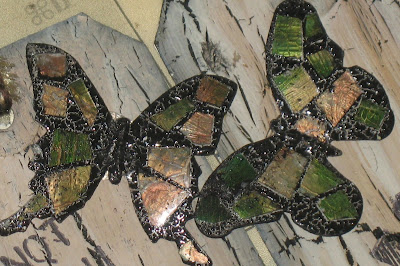 Well, I didn't have time to do the 12 tags of Christmas in 2011 so I was delighted to discover that Tim Holtz has launched the '12 Tags of 2012' with a tag for each month. A whole month to create - much less stressful!! I know I am a bit late starting, I have only done March's tag (I don't think Tim has done January's yet but I could just be reading the blog wrong) but I can catch up when I have time. I'm going to do two tags in the suggested style each month and hopefully as well as a lovely keepsake for myself I will have a readymade giveaway for January 2013 (it'll be here before you know it LOL).

For me doing the tags is not about following Tim's recommendations slavishly but the challenge of using what I have to do something similar. For March's tag, Tim used a woodgrain embossing folder to create the background on his tag but I don't have any folders or stamps that would be suitable so I used the old glue and acrylic paint trick. I think it works quite well!! For the mosaic butterflies I was able to use Tim's dies but had to grout with black embossing powder. The 'snippets' were the remains of some experimenting with 'Clearly for Art'. I had watched a Wendy Vecchi tutorial for making metallic looking flowers with CFA because I wanted to make some flowers to go with a steampunk piece I am making for next month's Art Draw. Well, to be honest I don't think my finished piece looked much like Wendy's but it was certainly interesting. (Probably need to watch the vid again!!) Anyhow I used it to make the small flowers on the tag and used the remnants for the snippets (tiles) on my mosaic butterflies. Because Iput them shiny side up I didn't use the glossy accents but I am well pleased with the way they turned out. There are more flowers and butterflies so they will probably be popping  up on other projects as the weeks go by!!
Posted by My name is Cindy at 21:33

You're having more luck with the art film than I am, Cindy. Beautiful interp of Tim's butterfly tag!

Fabulous Cindy - the backgrounds have turned out wonderfully & I love the colour scheme & the mosaic butterflies look brill!

Your butterflies look fabulous 100% better than my attempt........lol

Fabulous tag, love those butterflies.Thank you for the gorgeous bookmark that popped through my letter box today.
Yvonne x

Thank you for visiting my blog, love your tag as well

I missed this when I looked at WOYWW this week. These are fabulous versions of Tim's tags, no he has not done January yet, I think he is too busy with his on-line course. Love the butteflies. Regards, Anne x

Love these tags. The woodgrain background is fabulous. You did awesome with your own creation. Love the mosiacs and the nature feel of your tags. Awesomeness!

And I heard that the 12 tags started in February and at some point y'all will get back to January.