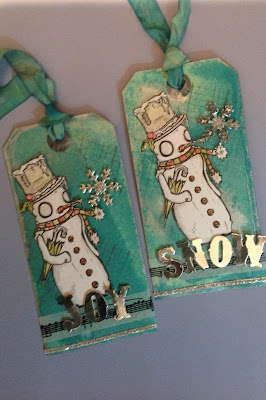 Nothing like leaving things till the last minute is there? Still I'm sure I won't be the only one!!

Right. Finally got a chance to mosey on over to Tim's blog to see what delights he had prepared  to inspire us in December. Two Christmassy tags to make up for the January one we'd left out - and why not, suits me I still have everything christmas out and to hand.

For the first tag I improvised with the background using a broken china distress stain but a silver paint dabber for the metallic effect. Worked a treat. For the snowman I fell back on my trusted Octopode digi which has been much used in Christmas cards this year, I really love him, he is just a little quirky (which appeals to me) but not so much that my card recipients would wonder if I'd been on the sherry. I didn't have tinsel but added a line of glitter. 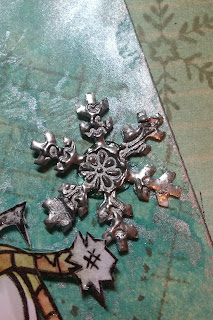 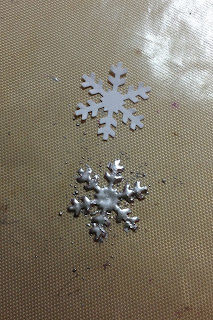 My snowflake embellishments are made from a heavyish card and covered with silver enamelling powder from Debbi Moore. I stamped into it while hot with a medallion stamp - well, some worked better than others but the idea is sound. They look quite metal like and it gives them a nice texture. I say some because as well as the two of each tag I committed to do this year (one for me to keep, one to giveaway in the January Art Draw) I thought I would prove I had read all of Tim's post and use one to make a card. Yay, I'm ahead of the game already for my 2013  Christmas cards!! 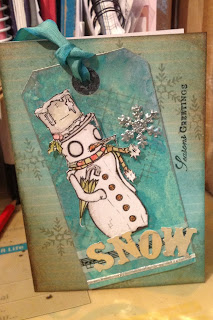 The second tag looked similar to one I had already made using a different TH technique, the rusted enamel look. So this time I just did the one following Tim's technique and design because I already have this one to keep myself and was pleased for an excuse to put it with my set of tags. 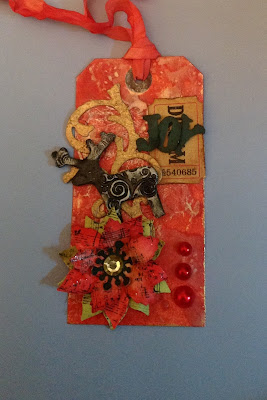 So here is the second of my Christmassy tags. Again I had to improvise a bit with my backgrounds (no metallic stains so used paint dabbers again - cool effect!!) and the embellishments but I think the finished tag looks OK (though perhaps not very Tim Holtzy).  This is the one which will go in the January Art Draw collection.

These two tags will get posted on the TO2012 post for December but I have missed most of them as I am always late for everything. I confess I still have 1 month's tags to finish but I won't upload any more now until the big reveal for the January Art Draw which I will post in a week's time on the 3rd of January. Hope to see you then!! 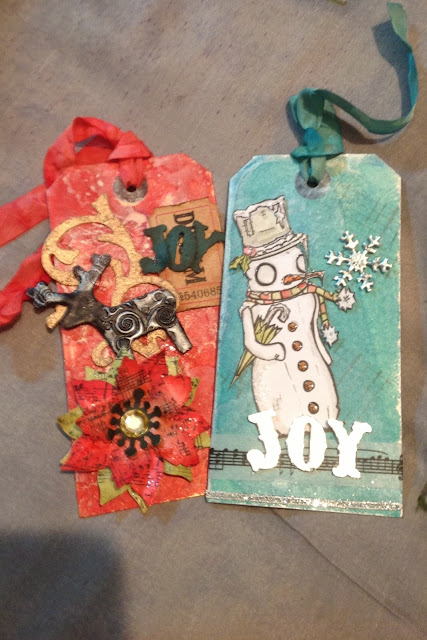 Quick Update: Thanks to all who sent good wishes, son's girlfriend now out of hospital so nothing to worry about - a great relief to all  of us!!
Posted by My name is Cindy at 17:27 5 comments:

The Random Generator has spoken and the winner is - no 9, SHERRY. I have your addy (!) so will be on it's way tomorrow as I have to go to the PO.

Goodness, where did December go? That's all over with then, we had a great christmas except my son's girlfriend was taken in to hospital yesterday and didn't make it to our Boxing Day celebrations. Don't know yet exactly what the problem is but she has been poorly this week. I may have told you that she was in a coma last Christmas and subsequently diagnosed with Leukaemia so we are a little concerned but hopefully will get some good news today.

My poor daughter had to leave for her shift at 6 o'clock this morning and hubby is at work too but my son and I will be at home for a whole extra week. Lucky us LOL. I'm still in PJ's and don't have any immediate plans to get dressed as I am nice and cosy!! Been watching some recorded TV (I rarely have time to watch tv so a guilty pleasure for me) and eating chocolate so as far as I'm concerned the holidays aren't over yet!!

Hope you and your families all had a great time as well and got all the pressies you wanted. I'm looking forward to another year of crafting and blogging and hoping to get a bit more time to spend doing my 'stuff'. Well, I can hope...

Back soon, good luck in all you do for 2013, and don't forget the January Art Draw is a set of TH style tags so please come back and visit!!

When I get them finished..... ooops, better get  cracking.

'Lucky Dip' - Choose 4 for Try It on Tuesday


This fortnight we are asking you to include four elements from the following list on your project.

Die cuts, Ribbon, Sentiment, Pearls, Distressing, Stamped Image
Our sponsor for December is Delicious Doodles, who are generously offering our monthly winner, their choice of 4 Digi stamps from the store.

Here's my project which is a white on white wedding card. I have used Die Cuts, a Stamped Image, Pearsl (inside the flowers) and a sentiment. 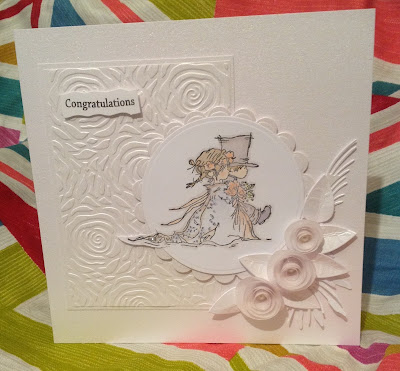 It was nice to do somethimng  non-christmassy for a change as it's been full on this month. However I'm nearly ready to clean and put all my crimbo stamps away - just one special card left to finish.
Well I hope you'll find a few minutes before or after the big day to join in with us at Try it On Tuesday. Can't wait to see what you come up with!!
Posted by My name is Cindy at 15:47 6 comments:

Getting Festive in the Home..... 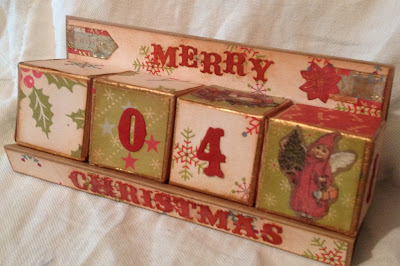 I originally made this advent calender for a friend but decided to keep it! I think the design needs a little more work and probably less patterns. (my OCD wants the patterns and pictures to create a pleasing whole and be the right way up whatever the day but I think that might be beyond my capabilities to work out LOL). 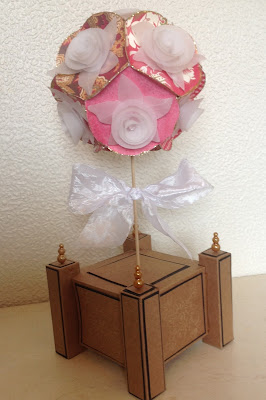 WOYWWers may recognise this 'tree' from past posts as it has been languishing on my desk for some weeks. I got a template for this from the 'Every Crafts a Pound' stall at Ally Pally and then adapted it a bit. Considering I just used scraps and a bit of Kraft paper this didn't turn out half bad. But having made one I wouldn't necessarily construct it in the same sequence I did this one if I did it again. If that makes sense.

Oh well better try and get some sleep, back at work tomorrow. After a week of really good sleeping despite my cough insonia is back with a bang just when I really need a good night's sleep. Take from that what you will.

Ooooh oooh before I forget AGAIN, it hasn't escaped my notice that the followers bar has crept up to 200!! Welcome everyone and thanks for stopping by!
Posted by My name is Cindy at 04:40 5 comments: 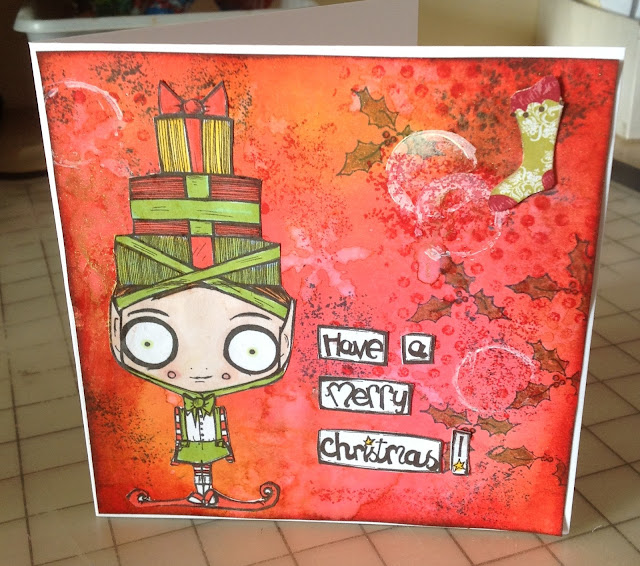 A quick card from me today. Felt like being a bit non-traditional hee hee. This little elf is an Octopode digi, quickly coloured with copics etc. Background - dylusions ink sprays, then overworkled with ghosting and stamping. Feels good to get inky!!

And for a change I am putting this in to two challenges, the TOFF challenge which is currently 'words' (well there are a few words on it!) and Artful Times which is 'Anything goes'.

Back sooooooooon. So much to do, so little time.
Posted by My name is Cindy at 10:55 8 comments:

OK not entirely original for a new year but this month's Art Draw is very practical!! 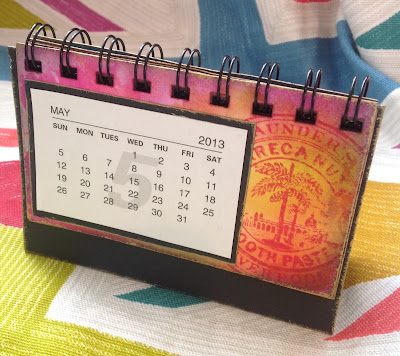 Here are a couple of pages. There are 12 in total (just checking you are paying attention).


It's not that big so not much room for decoration - but on the plus side it won't take up much space on your desk!! 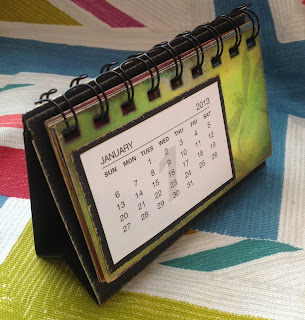 Usual rules apply, please leave a comment on this post if you want to be included in the draw. Let me know if you link from your blog so I can put you in twice. Overseas players welcome.

Closing Date will be 9.00 pm on Wednesday 26th  December (yes, Boxing Day) - hopefully I can get it to you before the New Year!!

And if you are in to giveaways check out that Crafty Individuals Blog Candy - got to be worth a go!!
Posted by My name is Cindy at 12:30 9 comments:

Thought I'd share a couple of things I made when I was demonstrating last week end. 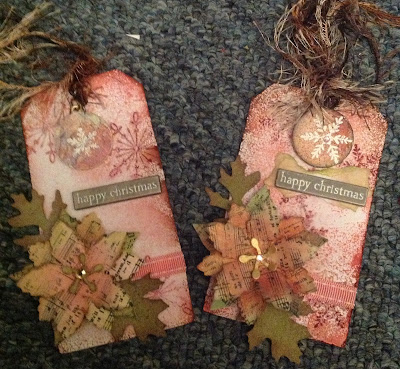 Really loved the way this tag turned out. I was trying out what Tim Holtz calls the 'rusted enamel' technique although I did mine in pink, so I thinks it's a bit more shabby than grunge! I also stamped my snowflake in to the embossing powder for extra texture. I was pleased to find a use for the metal 'happy christmas' embellishments I have had  hanging around for a while. I remembered seeing somewhere that using white paint over these kind of things really makes the debossed words 'pop' so I tried it out and really liked it. The poinsetta's are the same marianne die I used for the Christmas Wreath - they are so pretty I could put them on everything!! The embellishment was made from some 'medals' I had left over from a kid's promotion at work (librarians among you will probably recognise them) so a bit of recycling was included as well. 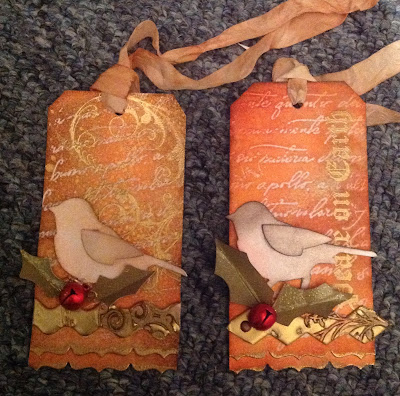 The second tag design I did was supposed to be showing a  'blended batik' background but after the first one I had a bit of an accident with my craft iron - I pulled it out from the socket on the floor, tossed it nonchalantly up onto the table and the plug landed right in my mug of cold tea which I had forgotten about. Honestly, you couldn't do it if you tried. I can't hit anything at all usually. Still it's quite a sweet little tag even leaving the background embossed!! I love the double bottom to this tag and was inspired by another blogger (I believe I even left a comment!!) but can I remember who it was? It's sure to be someone who reads this one as I don't get around that much!! So if this reminds you of something you did then let me know so I can give credit and a link - and thanks for the inspiration!! 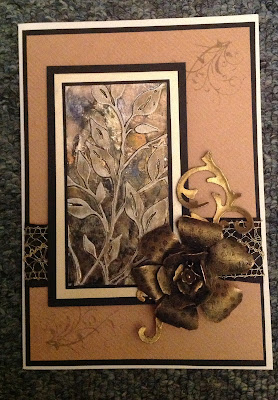 Finally a card with some metal embossing. I think it looks quite cool with one of my big Wendy Vecchi style flowers though I don't think this is one I can send in the post!!

Giveaway will be along later tomorrow (oops, just looked at the clock, err, later today then....)

Had a lovely morning opening all my lovely parcels from my crafty chums. You are all amazing and  I am so lucky. 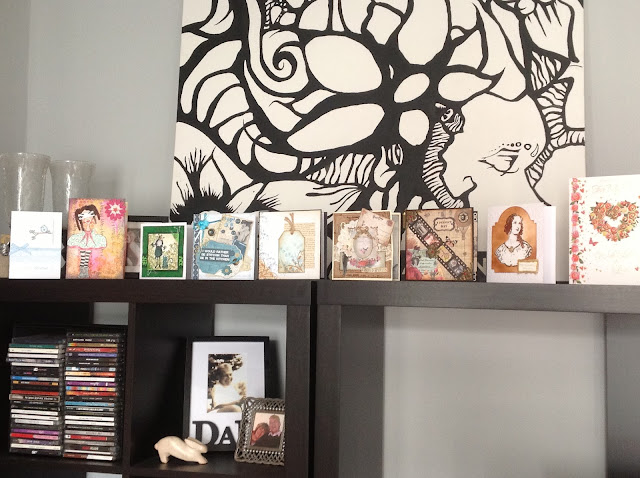 Here are my handmade cards on my new unit.

And some gorgeous pressies. All so different and unique pieces of artwork. Just stunning!! And some great embellishments to use as well.

﻿
I'll be round to say thank you personally as soon as possible. But for now going out to lunch!! See ya soon.
Cindy xx
Posted by My name is Cindy at 14:14 11 comments:

Goodness it's December......... Time for the November Art Draw winner

which is Chrissie. I'm sure I should have your addie hun but can't find it so will message you. As soon as I get it I'll get the Christmas Wreath on it's way so you can actually enjoy it during the festive season!! Gosh, only 24 sleeps....... haven't done a thing yet!

December giveaway will  be along shortly!!