I would say congratulations but these are not exactly awesome prizes lol.

Right, we need a pretty picture or this post will be soooooooo boring. Here is a 'Get well card' for my boss. She finally had her op to sort out a tumour on her back. Popped round yesterday to deliver flowers and well wishes and she's looking really great. 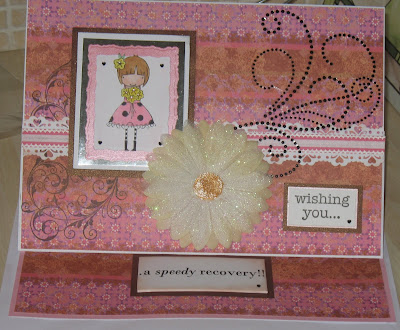 And here is my entry to this month's UK Art Raffle. 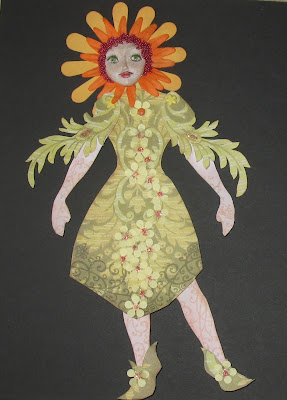 The theme was 'dolls'. I had a kind of Spring flower fairy idea in my head but she has kind of turned out a bit irish dancer/daffodil - maybe a subliminal hangover from St Patrick's day or something lol. If you like 'giveaways', this one gives you the chance to win a megabox of delicious art each month so go check it out. UK players only. But you've gotta be in it to win it!!
Posted by My name is Cindy at 08:16 5 comments:

I don't know about you, but I have in the past tried out bleach stamping without a lot of success and more than my fair share of trepidation (I am such a klutz, the bleach gets everywhere) but when I saw a presenter on tv (sorry can't remember who it was) use bleach in a water brush to lift off colour I thought that this was reasonably safe way to use bleach that I could go for!!

I took some watercolour paper and applied non permanent ink (I used Ink it up pads)direct to the paper. I assume you could use actual watercolour paints. I then stamped my image with a permanent black ink pad and then put bleach in a water brush (I didn't use my posh valve one, I have a set of non valve brushes and used the fine tipped one. I have now marked that so I will only use it for this technique). I then started applying the bleach to the image (sort of reverse colouring lol) and voila. Very fast and quite easy to control where the bleach goes! These were all pretty quick ATCs to do but I think it is an interesting technique. 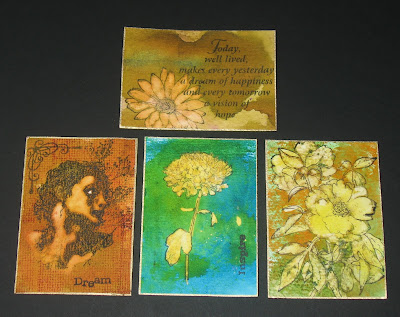 Obviously the effect you get probably depends on the paper, ink, colour and possibly even the strength bleach you use but I think the results are certainly different. I just added a couple of words and the odd flourish to finish them off. These are all available to trade. Have a nice day everyone!!
Posted by My name is Cindy at 09:49 7 comments: 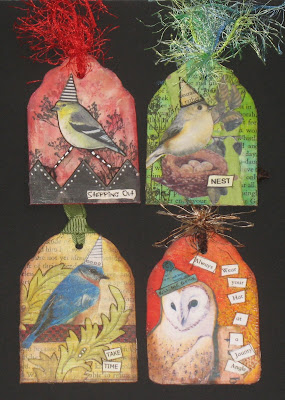 was the theme for this international swap. 8 tags, each with a bird, a pointy hat and a word/words/text. Easy peasy I thought and loads of time - then 10 days before I have to post them I knuckle down to do them and realised I didn't have any birds!! Or not the ones that worked anyway. Never mind, have managed to cobble some together and think they are quite pretty although I would have preferred a little more humour but just not in that mood this week. 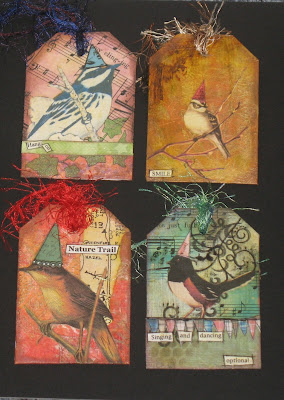 Well, I was actually intending to make a watch, but when push came to shove, I couldn't find the two little watch faces I had to use. They are obviously in a safe place, you know, the one you won't find for another three years......

Well, as I had nothing else planned and was kind of cut off in my prime I just made these strips of grungeboard up as bracelets. 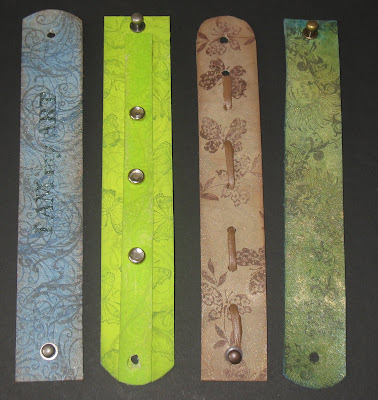 They have variously been inked/painted/stamped/embossed to try out some different ideas and are all up for grabs so we may have multiple 'winners' this month if anyone is interested. I do have to say I think they will only fit an average sized wrist, if in doubt they are approximately 7and3/4 inches long but you have to allow about 3/4 of inch for the fastening. These were not made terribly precisely so I can't be any more exact than that lol. If nothing else you can remove the fastening and make your own!!

Anyhoo, you know how it operates, if you want to be included in the giveaway then leave a comment on this post, stating which one you would like if you win. I will do a draw at 9.00 pm on Wednesday 24th March and try to meet your preference.

Just to show I have been doing something this week, here are three ATCs made for a decoupage challenge.

The second day of sunshine and boy does it lift one's spirits!! Let's hope that Spring is really just around the corner, it has seemed like a long cold winter - and I live in London where it really isn't anywhere as bad as the rest of the country (I know everyhting grounds to a halt here but the only thing I can say is there are a LOT of people here to move about when the weather gets bad.

Anyway I digress from the main point of my post which is to show you what I've been up to. It does seem that all I have done since Christmas is cards and birthday stuff - I've got a few biggies this year. Sadly, although my Tim Holtz book arrived I didn't get messy in time to join in with the Tuesday Taggers theme last week, but I see that this week's theme is 'Swirls and Curls' and I have just finished a card for my sister's 50th next Sunday (the weekend away (more of that later) was an early celebration). I think it has the sufficient amount of chipboard and paper swirls, the hearts are embossed with them as well and even the flowers have been curled (a bit tenuous but.....) so this will be my entry for this week. Don't you just love it when things come together? This week is sponsored by CRAFTY INDIVIDUALS one of my favourite stamp suppliers so there is a chance of a prize as well!! 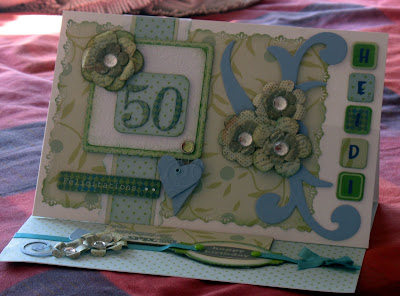 It was also my friend Georgina's 60th birthday and I made her a little exploding box a few weeks ago when trying this project out with my mum. My mum described something she had seen on telly and I think the original came idea came from Linda Mason, but I also had advice from my friend Joan who made a beautiful example last year, which was a help as otherwise I probably wouldn't have know what mum was on about (bless, she is 76). When I made it I didn't realise it was a really special birthday for Georgina so there are no numbers on it - but hey, who wants to be reminded? 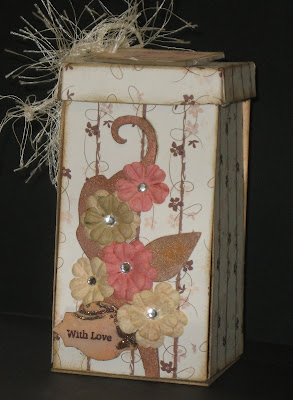 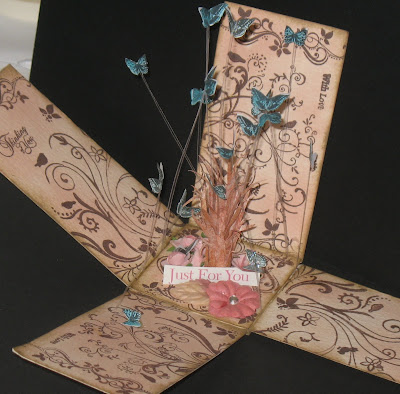 I made this picture frame for another friend of mine who is a card maker and who comes over every week or so for a couple of hours crafting and a chat (She usually crafts I chat lol, no wonder nothing ever gets done). I made a large mirror in this style last year and have it hanging in my hall (about the only bit of artwork of mine I do have on display!!) and she admired it so I made a smaller version for her, supposedly for Christmas. Well she got two presents this year as I've only just finished it. I have used stampboard as I love the deep colours you can get with inks and the etching effect that can be achieved. The picture in the middle is just for decoration as it will take a photograph, unfortunately I don't have one of the two of us which would be nice. 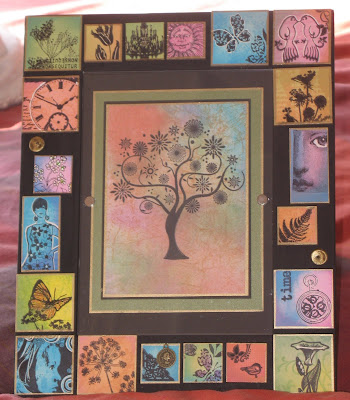 Of course what has really made me happy this week is the delivery of my shiny new car - it's been a long wait but it's here at last and although public transport has been excellent it will make life a bit easier to have wheels again. One of the reasons we didn't get away in the end this weekend was because the car hadn't arrived. However we had a great girly day out instead at the Westfield shopping centre - we even visited the champagne bar (hic!). 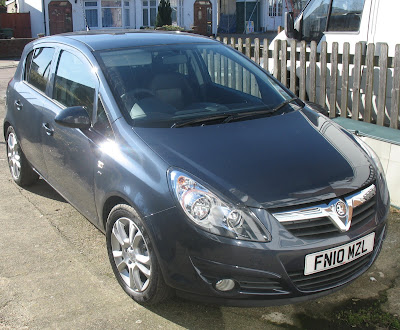