First my entry to the Flickr ATC trade group 'Altered Ideas'. The current challenge is to use a colour swatch - rather more difficult than I had anticipated!! Still, here's my offering: 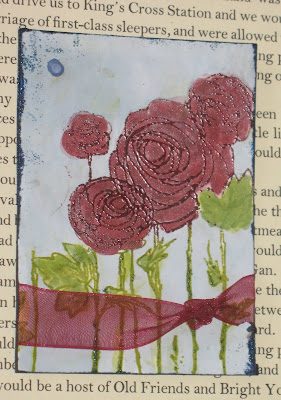 and secondly, my final contribution to the UK Art Raffle as sadly this challenge blog is closing due to lack of support. For this I made a slide mailer with a slightly oriental feel. This again was a colour challenge, red and orange. Such a shame. 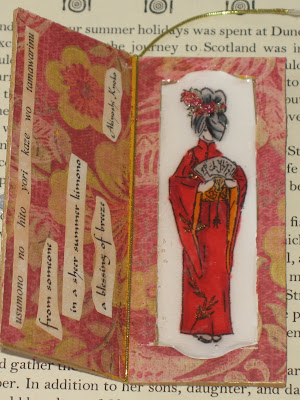 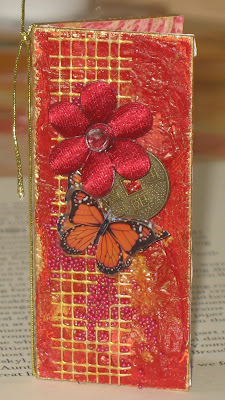 I realise I am in danger of becoming a bit repetitive but crikey, where did this month go? We are nearly at pay day and I still haven't uploaded this month's giveaway - this always happens when I am trying to be organised and get it done in advance!!!

This was a relatively easy make, inspired partly by something I'd seen in craft stamper (and no, I am not going to go back through the issues to tell which one or this will never get done) and a lovely set of glamour girl stamps I recently liberated from my friend Viv. Basically just inked background and some stamping. Do you remember the packaging I used last month to make a sundial tryptich? Well, the glass clip frame is what was in the packaging. I thought I would finish it off with a little stamping and embossing on the glass which so far seems to be holding up.

Anyhoo, the usual rules apply. Should you wish to be included in the draw then leave a comment on this post before 8.00 pm on Thursday the 30th September. Overseas players welcome, and please feel free to link from your own blogs.
Posted by My name is Cindy at 22:01 5 comments:

but I am crazy mad making cards to sell at My MacMillan Coffee morning in a couple of weeks. However, yesterday evening when I got in from work I had an overwhelming urge to take a break and make some art (no disrespect to card makers everywhere intended!). I really wanted to make sure I had an early entry for my altered art challenge group on flickr, 'Art n Soul' because I have missed so many lately. The September challenge is to alter a beer mat or coaster to the theme of nature. Initially I was going to do just a single mat for speed, but after looking at the Tuesday Taggers theme of 'Books' I decided I would make a little book and satisfy the requirement of both challenges. 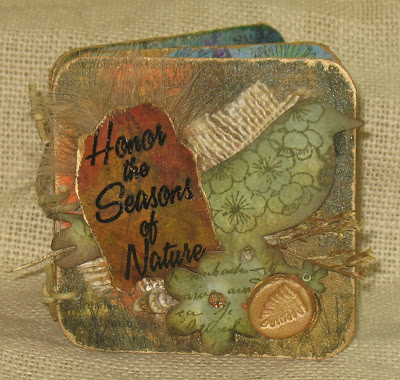 I took three mats and covered them with old book pages and then had a lovely fun day splodging and inking and stamping - sometimes I think the end result is more gunge than grunge but I usually have a good time and I find a bit of gold paint here and there tends to lift the whole thing!! 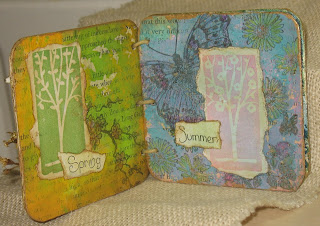 As a title I took half a quote stamp 'Honour the Seasons of Nature' and then made four inside pages using a set of seasonal tree stamps by Whispers/docrafts that I have had forever - I think they were one of the first sets I bought, well before my current affliction took hold. 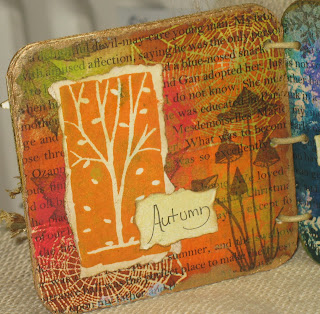 I particularly liked the way the autumn page turned out. 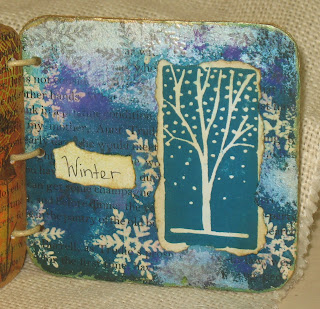 For the back page I kept it quite simple and after abandoning my split rings as fasteners because they were just too big I just knotted some cord to hold the whole thing together. 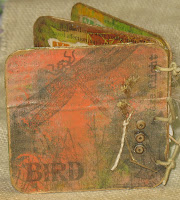 It's rare that I get a project finished in one sitting so to speak (well I did start last nighht so a bit more than one session) but for once I really knew what I wanted to do and not too many things went wrong. Just you don't love it when a plan comes together? Ah well, that's my fix over, back to the cards lol.
Posted by My name is Cindy at 20:58 10 comments:

This is going to be a long post, so feel free to jump to the end result. I don't often give detailed breakdowns of projects, largely because I'm sure other people can do it better, but I enjoyed this project so much I thought you might like to see how it developed.

My starting point was the book 'Stitch, Cloth, Paper & Paint' by Angie Hughes and I would refer you to that for a real breakdown of 'how to do it' (slightly different to my how I did it version!!!). There are several yummy projects in the book but one had caught my eye which was a (faux) Sundial Diptych made from two small canvases.

Aah, stopped at the first hurdle. Nowhere could I find a small canvas even though when you are not looking for one I'm sure they are a dime a dozen. Not to be fazed, I went to a local 'home' store to try and find a cheap frame that I could maybe alter. Couldn't find anything suitable except..... maybe I could do something with this polystyrene packaging.

It obviously needed bulking up, so I used some mountboard to add a backing.

The next step was to create the fabric based covering that was going to go over the whole thing. Basically you need to add interfacing, tissue, netting and then do lots of beautiful stitching. I discovered my interfacing wasn't iron on kind (or I wasn't doing it right) so I helped it along with pva. I had forgotten that my antique sewing machine (it is nearly as old as me) no longer has a functioning bobbin winder so that had to be done by hand. Consequently I wasn't about to practice very much and dove straight in.I also only used ordinary thread so my 'vermicelli' stitchwork is more like a spider that's gone through an ink puddle but the spirit was willing if not very skilful (this is why you have to see the original - the machine work is stunning). The orange bit is tissue and is only orange because that was what came to hand - it all gets covered up anyhow.

So this is what it looks like when it's all attached to the frame, complete with various bits of beading and stitching, plus tissue, paper and extra fabric in various shapes.

Next we add colour, a base of yellow acrylic followed by a mix of blue and green and oddles of cosmic shimmer sprays and micas - it ended up with a great almost leathery texture. I prepared a sheet of paper in the same colours at the same time.

The finishing touch was to punch out flowers from the prepared paper and add as an embellishment along with sequins and stitching. 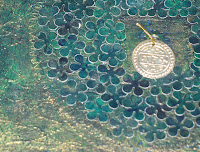 Before putting the whole thing together I had to cut out some apertures in the inside pieces and put in a picture or other decorative element as well as attaching the string which will hold the top section upright when the 'sundial' is opened. I chose a stamped picture of a vintage lady but instead of cutting out the corner spaces (OK I bottled it) I added some gilding. I then realised that the polystyrene base would not be able to handle screwed hinges, so I made the hinge using some heavily glued mesh.
At last we are finished. Here it is closed:- 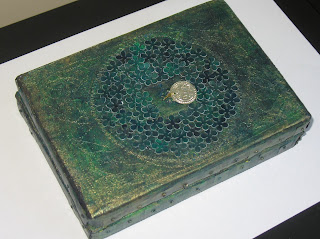 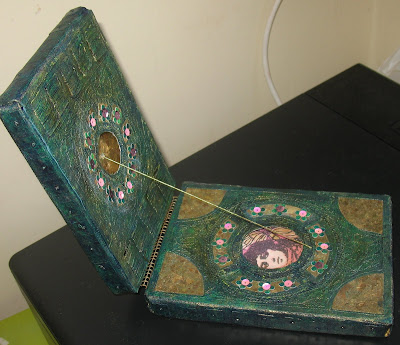 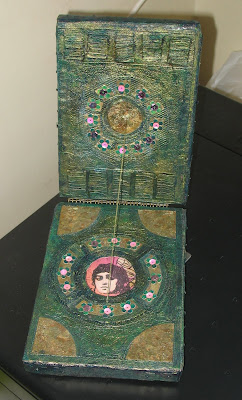 A totally useless, if pretty, object made from some old packaging, cloth, paper and paint. Gosh, that sounds like the title to a book!! That's all for now folks!!
Posted by My name is Cindy at 13:11 7 comments: