How do you store your ATCs?

The other night I was tidying up my ever growing collection of ATCs into some sort of order because putting the best ones in the glass cabinet was becoming a bit of a problem - they're all good!! I also wanted them in albums so that I can take them to the meet being organised next week as I thought peeps might like to have a browse through - nothing like seeing the works of art 'in the flesh' so to speak.

Whilst I was sorting, I came across the set of ATCs that I 'won' in the New Inspirations August lottery. Basically everyone in the group who wants to play makes an ATC on a set theme (that month it was Friendship)and a 'winner' is selected at random to receive all the ATCs. As I looked at them again, I realised that I hadn't looked at them since the day they plopped on to the mat, which I thought was a great shame, and what I really needed was a way to showcase them. So here it is - Ta da!!! 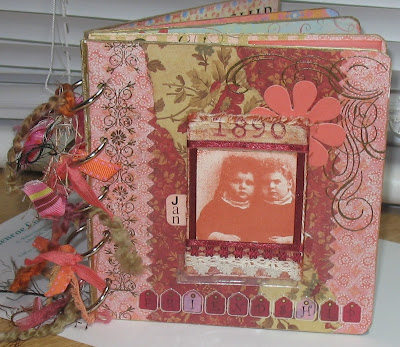 I decided that the best way would be in an altered board book album. I divided them up into similar sort of colour ways and chose some papers for the pages. I was also able to use up some the 'Friendship' stickers and rub ons that I have collected but which never seem quite appropriate for cards and are usually too big to go on an ATC. One of Jan'e entries was quite thick so that had to go on the front cover (that gave me a few problems and I'm still not entirely happy with it).

I decided that I didn't want to actually stick the ATCs on so instead I have opted to stick the little ATC sleeves on to the pages and then use them to hold the ATCs. I did think about photo corners but a) didn't have any and b) some of the ATCs were quite thick and I thought they wouldn't work. (I had some really great little stickypockets made of heavy duty plastic that I 'liberated' from elsewhere, alas they are about 2mm too small for an ATC. Grrr!!) Anyway, time will tell if this works or not. I expect this piece will get handled a bit next week - if it survives it was a good idea!! Because I don't really want the ATCs to be taken in and out I have put the name of the artist on a little tag next to each one. (Margaret, sorry I had to put you down as MAMMA as I didn't have room for Margaret and I was running out of 'Y's for Maggy). 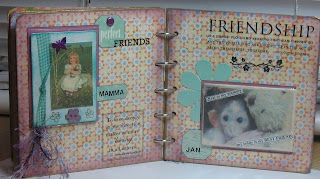 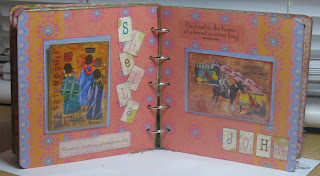 Some of the papers I chose were quite busy and I did wonder at first if the individual ATCs had got a bit lost on the page. However after handling it for a day I think it does work and these little pieces of art will get more attention in this book than they would in a 9 pocket album. Right, that's those few sorted, now what to do with the other 3,373..........? (joke, I don't have quite that many..) 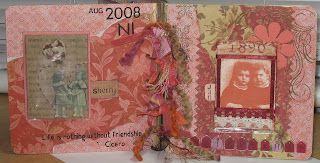 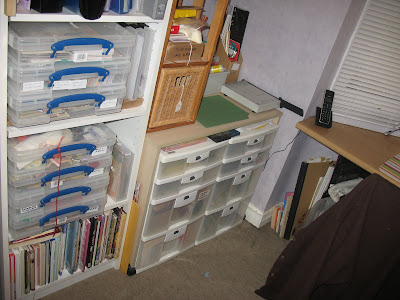 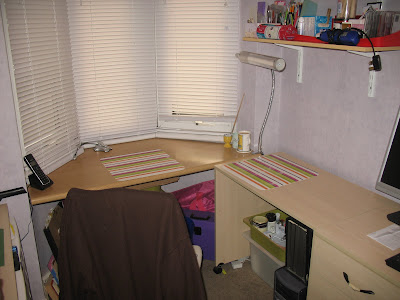 My attendance has been pretty sporadic lately due to major redecorating going on at home which has also involved moving things from room to room, sorting, recycling .... you get the picture.

But the achievement for me is that I have a craft room, small but perfectly formed. I have all my craft stuff within reach (not a 40 step walk from the craft table) and the kitchen and dining room have been returned to their former purpose. The pc has gone wireless (so far so good) and I even have a little bit of surplus storage space. (Room for more stash........).

All I need to do now is work out a way of displaying a few of the gorgeous items I have collected as trades and pressies over the last year. 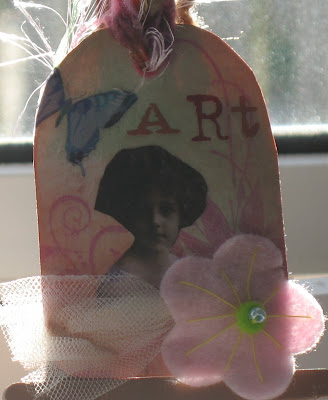 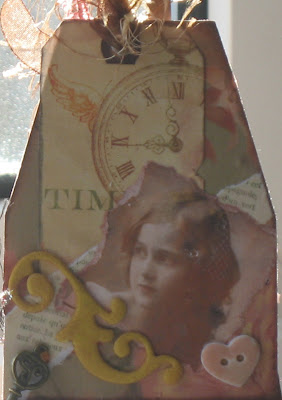 Bad blogger again, was going to put up some new work but realised that I haven't photographed anything!! So a bit after the event, here are a couple more tags I did after the tag challenge the other week.

I have been very busy lately, working and having a life and I wanted to share something that I did with you - last weekend I went to visit a friend who lives in the village of Compton, Surrey, home to the Watts gallery. Watts was a Victorian portrait artist and symbolic painter with strong links to the arts and crafts movement. Sadly the gallery is currently under renovation, but my friend took me to see the chapel created in his memory by his wife Mary Seton Watts which is in the village cemetery. I didn't know what to expect but I was stunned, it is absolutely beautiful and if anyone is ever in this neck of the woods I strongly advise you to go and have a look. Unfortunately I didn't have my camera but it is just one of the most wonderful things I have ever seen - if you click on the link there are a couple of photos but they don't really do it justice.

Apart from that, I have been working hard in all my spare time this week to finish the works going on at home and consequently have been really tired and unable to face the pc at night. Still, it's been another great weekend spent with my family and I'm feeling very refreshed - time to do some serious crafting. Plus must do some uploading and blogging so off to find the camera. Watch this space!!
Posted by My name is Cindy at 21:46 2 comments: 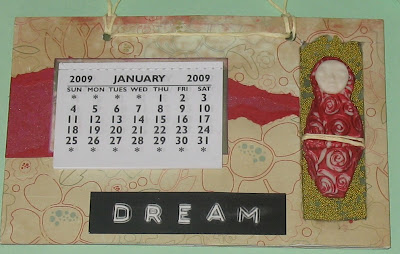 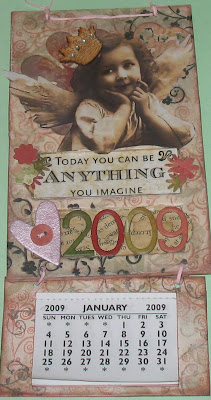 Inspired (lol) by two different articles in Craft Stamper magazine I had a bit of a flurry making these calendars using altered slide mailers. I'm off in a couple of weeks to a crafty meet and I think at least one will go with me as a raffle prize contribution. The others may end up as crimbo pressies, or I may keep them myself.

On two of them I used Cosmo Cricket papers which are really pretty and the quality is superb. They have inspired me (there's that word again!!) to make some little mini albums using old baby board books from the library which I have a fairly regular supply of as they get well used and have to be removed from stock fairly frequently. Nothing that can't be recycled though (I do throw the really bad ones away!!) and they make a great base for little scrap books, although I haven't actually finished any of them yet!! Watch this space.

The calendar below, has space for an ATC which can be changed whenever you like - thought this might be a nice and useful way to keep your current favourite on show - as long as it's not too dimensional or heavy!! The finished colours went well with the 2 little girls ATC which I have put in to start it off. The image was from a challenge on Mind Wide Open , something I didn't in the end get finished in time but I loved it so much I had to use it. 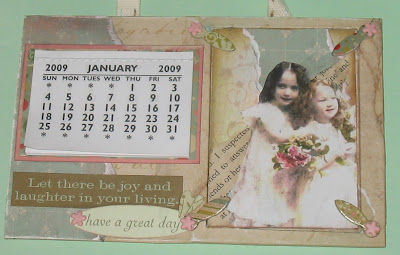 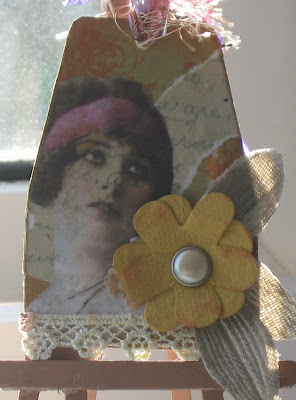 This week's MAMMA challenge is vintage tags. I have to say , I'm not sure I like the proportions of ATC sized tags, seems to me they ought to be slightly taller but these are my two attempts for this week (yes two, I am on the ball this week). In fact have had a bit of a run on tags once I'd started,trying to decide on the perfect shape. There are a couple more in my flickr gallery. 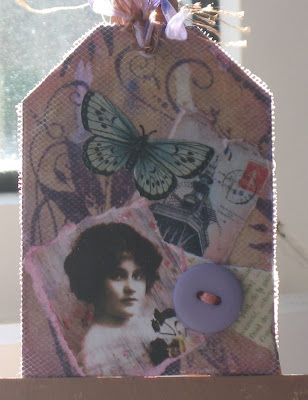 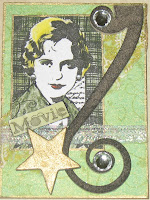 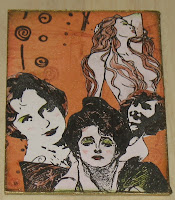 Well, not that bad, it's only been a week but it seems like an age. I am really finding it hard to get used to working an extra 10 hours a week plus lots of other stuff going on.. seems more sensible to get on with crafting than spend hours on the pc - you KNOW how the time flies once you start.

Anyhow, thought I would share these three ATCs which I have sent off to the ATC swap at Craft Stamper. In the end as usual I was right up against the deadline but I'd started so I was determined to get them off even if I didn't think they were that great. I have never sent anything in to a magazine before but I suppose it could lead to more people to swap with!!

Speaking of which, here is an ATC I received today from 'Cat' who I met at Ally Pally at the end of September. She is new to the UK and was really excited to hear about the ATC community over here. I gave her an ATC as a RAK but she insisted on reciprocating, even including some crafting goodies. Ain't crafters great? 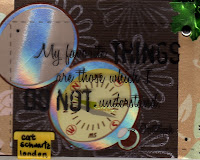 Imagine - a Journal page for Paula 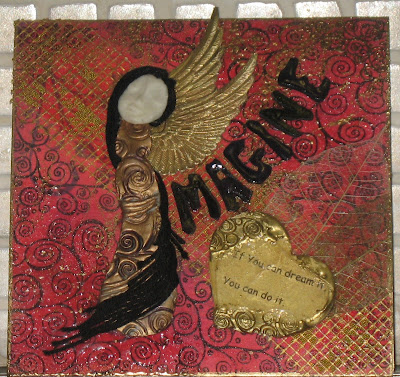 Have done quite a lot this week but had no time for blogging (or updating my DACs which is now getting so behind it's in danger of overwhelming me.)

Still finally finished this page to my satisfaction - it has had a few re-incarnations - and posted it this morning. The idea came from a doodle I did on holiday, the original 'doll' shape that I drew I looked very motherly, in fact pregnant, and put me in mind of Paula who had just told me she was expecting (Yay!! Congratulations again). I like the quote, which I believe is from Walt Disney. I did a tape transfer on to the mountboard heart (heaven knows why - islagiatt)but then I didn't like the edges of the tape (I never do). I tried to make them disappear by using matt golden gel (didn't happen), then tried clear embossing over the top (made it worse as plastic all curled.) So just before scrapping it decided to attempt to fudge the edges with a bit of Metal Magic which I then stamped into. I was very happy with that. I won't bore you with the background - only done twice, but the original head to the doll had clay hair that I rolled by hand (Heidi has told me how she does hers now but I haven't bought the machine yet) but it wasn't that good. And I also made the strange decision to paint the face and put eyes and eyelashes etc - SOMETIMES this works, but this one looked like an overpainted tart so like the queen of hearts I shouted 'off with her head' and replaced it with one with closed eyes and re-did the hair with fine black cord. Much happier. And I promise I will stop using that KLIMT swirl stamp ................... even if it is only because I have bought some different ones! Am loving curly, wurly, swirls.
Posted by My name is Cindy at 13:27 7 comments: