Tim’s December tag is HERE – we have making a 3 dimensional flower, stamping and embossing, and stencilling through a mask and, er,….. paint splattering. Surely even I can do that?

The techniques for the flower are a little product dependent and although I do have clearly for art I have never even seen the frosted vinyl. So I  decided to improvise by sticking some vellum on the CFA with glue n seal. Was devilishly difficult to die cut, but that may have been the die I chose because I have done this before with paper + CFA no problem. All the manipulation caused the vellum to become unglued so I have a feeling I won’t be recommending this as an alternative (but maybe if I had used an adhesive sheet to stick them together………). However as I have only the teeniest bit of CFA and plain vellum left this is not going to be a day to experiment!!

My finished flower, although not perfect, is rather pretty and I just love the translucent effect the vellum has given it…. so that frosty vinyl might just be going on my shopping list along with some more CFA and plain vellum. For my second tag I had to use a bit of printed vellum that was in my stash – not as robust as the CFA flower certainly but not too shabby – I may have found a use for that huge stash of printed vellums in my cupboard!! 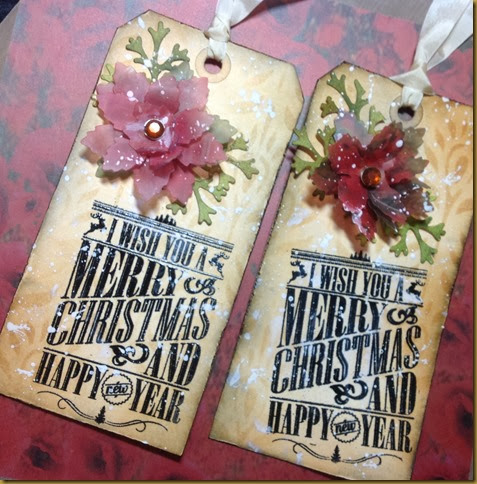 The splatter technique filled me with trepidation – here surely was a chance to really mess things up! After donning suitable protective clothing (!) I commenced splattering – well,there must be some principle of physics in operation here as I was astounded at how many times you can flick a paintbrush loaded with white paint at a tag and fail completely to get ANY AT ALL on the tag. But boy, did it flick everywhere else!! Although I liked the finished effect and was getting a bit better at it by the end of the second tag it took me longer to tidy up than to make the whole tag!!

Now those among you who give a hoot may notice that I have missed out the November tag. This was the chalk art effect one. Simples one would think. Well it would be if I could remember where I put the chalk…… the tags are prepped and ready to go, and I’ll show them to you in a day or so when I have either found the chalk or had a chance to liberate a stick from my stash at work. They’ll all be finished in time for the January giveaway which I will upload next week. Promise. But now it’s time to put the glad rags on and crack open a bottle of wine, preferable with bubbles….it is the end of 2013 after all!!

It only remains for me to wish one and all a very Happy New Year and all the very best for you and yours in 2014. Hope to see you around the blogosphere.

of favourite cards that I made this Christmas and haven’t had time to share. 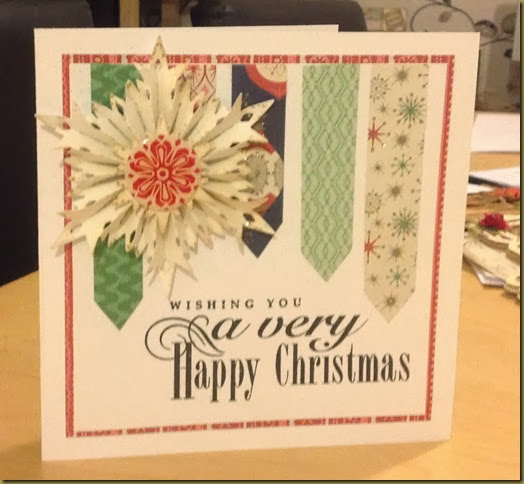 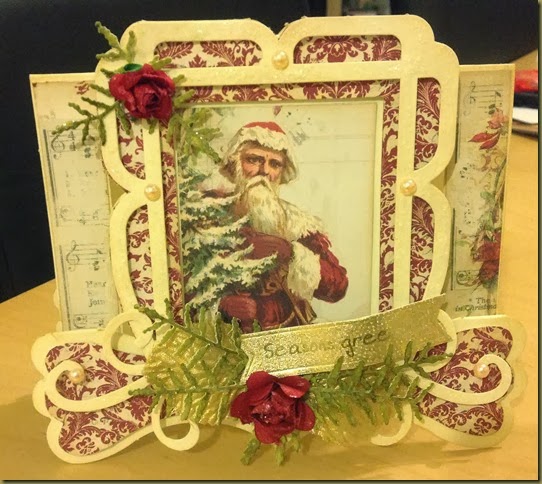 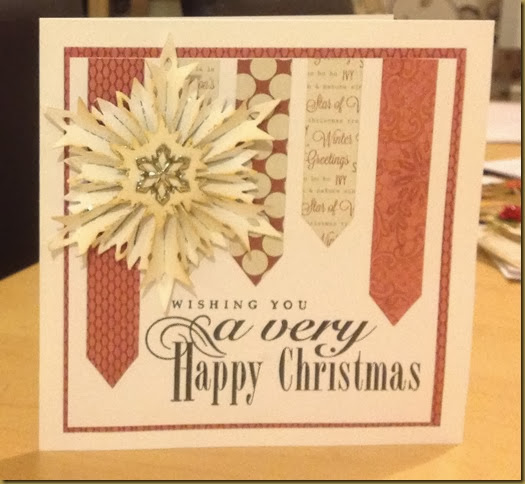 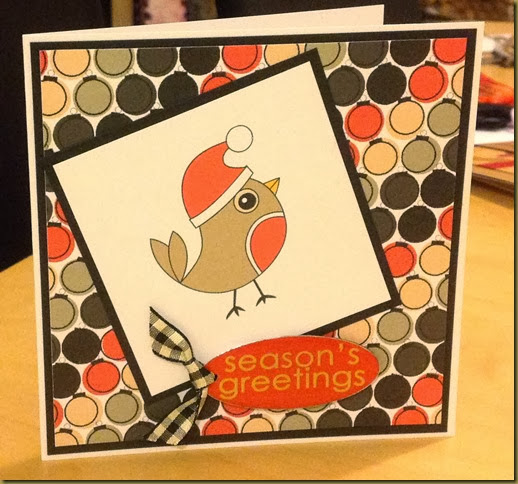 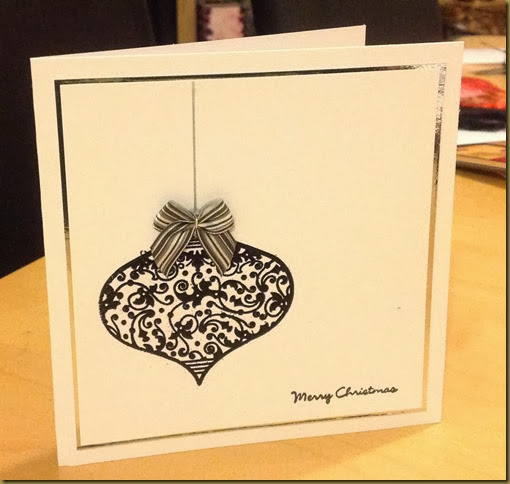 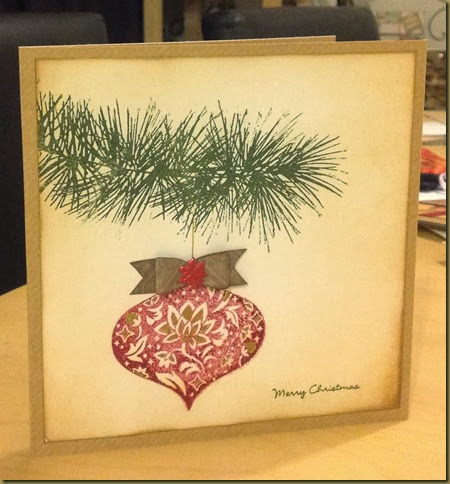 A little later than advertised, but the winner of the Vintage Calender is Glennis (I have emailed you hun).

Hope everyone had a great Christmas!!

Well, there is more to winter time than Christmas right?

Our challenge this fortnight is to create something that celebrates the winter season - maybe some form of fun you might have during the Winter, for example skiing, skating, sledding.

For my DT piece I have made a card using a digi image from our sponsor, PAPER SHELTER. 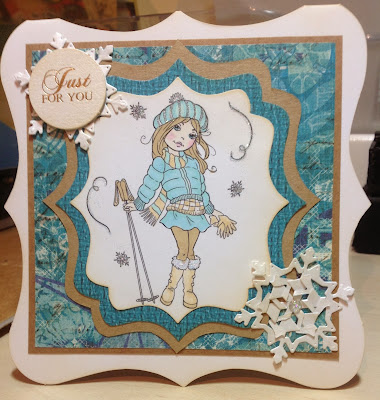 She has been coloured in with promarkers and I used papers from my stash (I think they are CD papers) and Kraft card. The snowflakes are made using a spellbinders cut and tuck die, this little one is particularly cute. And of course. some glitter!!

So I hope you will find a minute or two for yourself in the midst of your Christmas preparations to join in with us for our last challenge of 2013. Drop in to Crafty Cardmakers for more inspiration and to link up with your project, we'd love to see what you make.

Try It On Tuesday... A gift or tag

I'm a little late. The story of my life. My trusty mouse died yesterday and I had to wait for the batteries to re-charge. But that, as one might say, is simply a first world world problem, and of no consequence in the greater scheme of things.

To Business!! This fortnight at TioT we are asking you to create a handmade gift or tag - it can be for any occasion.

My DT entry is this little trinket box which I have decorated as a gift. 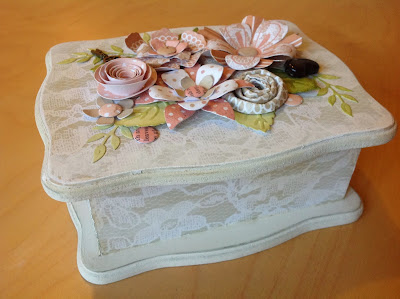 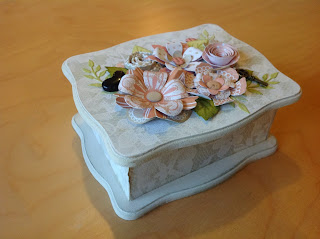 I have used paper from Craftwork Cards Paper floristry kit, and added extra die cuts, a little UTEE heart and a key charm.

The third picture was supposed to show it is decorated inside as well but I'm afraid you'll have to use your imaginations!! 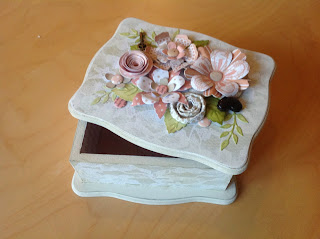 So let's see what you can get up to - it's Christmas so there must be an excuse at least for a gift tag in amongst all your crimbo preparations!!


Don't forget to check out Try it On Tuesday for more fabbo DT inspiration and we look forward to seeing what you make this time round.

Quick off the mark or what? (Don’t answer that) Well the Christmassy one was last month and so now we have a calender for the New Year. 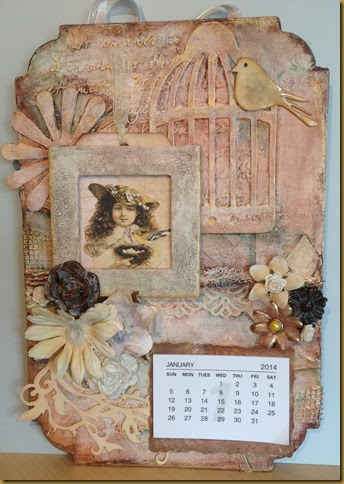 STILL trying to nail that Finnabair look LOL. Love the soft vintage tones of this piece.

Obviously it’s a calendar so has a limited shelf life though I suppose you could add a new calendar bit if you wanted to keep it for another year or pass it on to someone else.

The little vintage tag was a freebie from Astrid’s blog and I did think that the recipient might like to exchange it  for a photo of their own to ring the changes so to speak. Up to you, but I have made it removable.

This one will finish on Sunday 22nd December so I have a chance to get it to the winner before the New Year. If you want to play, add a comment before 9.00 pm that day and you’ll be in the draw. Overseas players welcome (but of course can’t guarantee delivery time!!) and feel free to link from your own blogs. That’s it folks!! 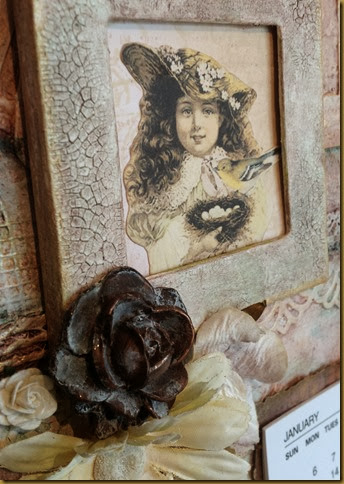 Oh dear what a calamity....

I seem to have lost a couple of weeks somewhere. I cunningly set the date for the end of the November giveaway a week early so it could be sent in time for Christmas and wouldn't miss overseas posting dates.... and then forgot to do the draw.

Not many players this month, and the winner is Susan from Sweden. I have lots to post tomorrow so it will  be on its way very soon.

Thanks for playing!! - December giveaway will be up tomorrow. Maybe even later tonight.