What's On Your Workdesk? Wednesday - WOYWW #543

Gosh Wednesday again, I can hardly believe it. Slow start for me today, I'm posting this just before midday. Well here's the desk!!: 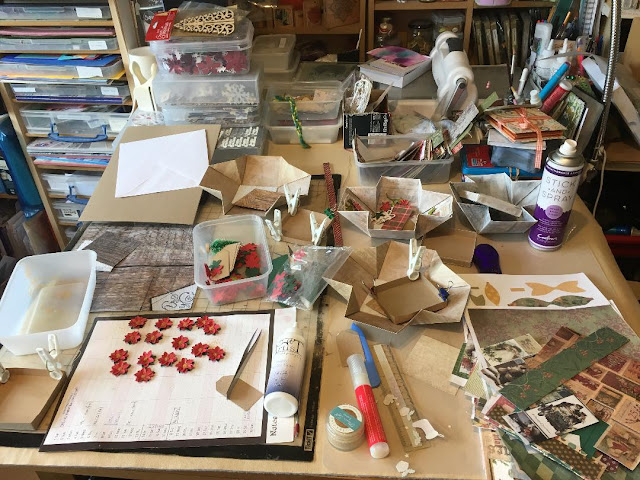 I'm planning on a bit of a production line for my little christmas exploding boxes. They went down well yesterday at class but thought I'd use up the remains before I put it all away. Had hoped to be done by lunchtime but starting so late I doubt that will happen. 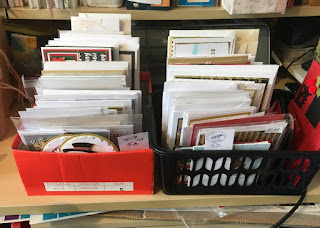 I'm doing well at the Christmas cards - there are over 100 in those boxes. Still plenty more to plough through though, there are papers, stamps and dies still to come out the packet!! I'm rarely this organised and I'm not entirely sure how it happened. 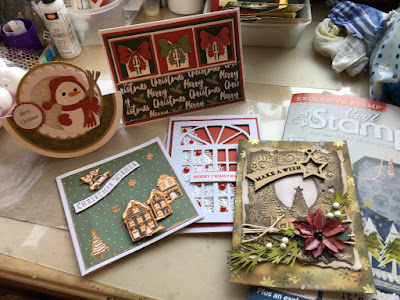 These are a few of my favourites this year so far (with a nod to pinterest for some of them). I particularly like how the peel off one turned out, especially as I rarely use them but these came with my Christmas demo pack from docrafts. Also my new Craft Stamper mag  - something to browse with a cuppa later I hope.

I should be in the garden, it's a beautiful day but just not in the mood today. This picture does not give a true representation of how beautiful all the autumn colours are in the sunshine. My wider view is even better. Sadly it won't last long. 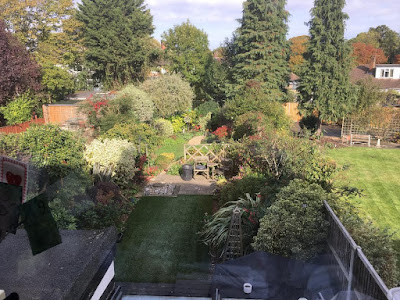 Why am I telling you this? Well, pop on over to the Stamping Ground and find out all about this weekly desk hop
Me? I'm off for a nosy and I sincerely hope I get further than last week!!
Happy WOYWW Cindy

Job update: My son started work yesterday after a complete fiasco Monday when admin asked him to attend but had no one there to deal with him. You couldn't make it up. Came home from his first day with  a temp and tonsillitis which has plagued him since he was 8.  Still he's off to work suitably dosed up and armed with a ton of throat sweets etc. Hasn't been ill for a year. He really can't catch a break!!
Posted by My name is Cindy at 12:01 18 comments:

What's On Your Workdesk? Wednesday - WOYWW ~542

Not a lot going on apart from endlessly crafting, prepping and doing laundry. Doing stoptober so no alcohol which frankly, makes life a little boring. Or perhaps its just I'm not looking through my humdrum days through gin coloured specs. (Only joking). Good news, son has snagged a job but I'm not celebrating, we've been here before more than once this year and then they suddenly stop answering emails and phones.... As an ex personnel peep I am horrified by the way people are treated these days. Recruitment should be easier (and cheaper, but they all use agencies so probably not) than in my day because everything is done on online but they are appalling!! No standards at all. This time its a big national company so I'm hoping this one pans out.

Oh dear I seem to have gone on a rant. So here's the desk.  It is tidy as is my other desk but you don't need another photo of an empty space. Have that Christmas card to prep for a class (Pinterest, can't take credit for initial idea) and had an early morning request for an emergency 18th and have pulled out that topper and papers to do that. Plus I have to find a birthday card for someone I am having coffee with later. 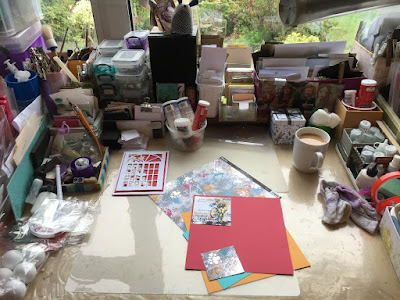 My 'home and family' to do list is enormous and I'm trying not to feel overwhelmed. I'm not sure I'll even get round today. Trying to find an hour to garden or walk as well. Sometimes I think it was easier to be at work! Still, one thing at a time....
Why am I telling you this? Well today is the day we snoop around our fellow crafter's desks to see what they are up to. All courtesy of the wonderful Julia Budd at Stamping Ground. So pop on over and join in, why don't ya.

What's On Your Workdesk? Wednesday #541 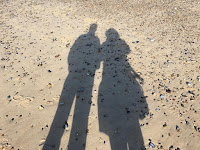 Morning all! How these weeks fly by, I was in Norfolk last week and it already seems like a lifetime ago. Managed to miss the rain and had fairly good weather, perfect for walking. 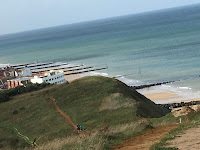 Here's my desk. Not v inspiring as I kind just sorted one of the mounds and pushed the rest out to the edge so I could  take a photo. I AM going to do something with that pile of felt at the back. If only I could find the one needlecase I already made... For some reason I can't seem to move forward until I do, but I am absolutely stumped as to where I have put it. The whole craft room is in borderline panic mode as Christmas is well and truly out which means there is NO ROOM TO MOVE. (You may find I get slightly more hysterical from here on in as the weeks progress). 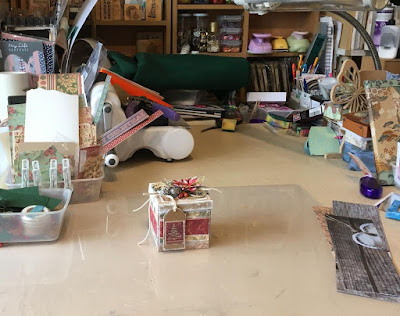 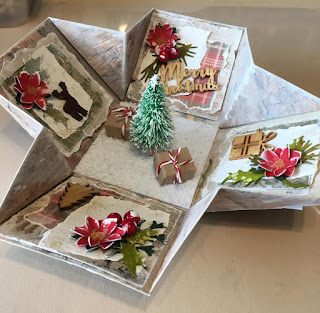 The exploding box is a project for class in a couple of weeks. Rather cute but not entirely sure what its for. Well, if you have to ask......


So you know the drill. It's Wednesday, we nose around other crafter's desks to see what's what. All courtesy of the lovely Julia Dunnit of Stamping Ground. Pop on over, link up and join in why don't ya?

What's On Your Workdesk? Wednesday - WOYWW #539

Well, I don't know about you but I'm already having one of those days. One of those not quite ready for it all, feel a bit fragile, one step at a time, taking it easy kinda days. Nothing wrong, very happy, just feel a bit - slow LOL. Hubby, fairly newly retired and frustrated by the rain preventing him pursuing projects in the garden is up uncharacteristically early and already painting the bedroom. It's not that a big deal, the 'new' duvet I bought in trendy grey and mustard is 3 years old this month, that's how long I have been waiting. Still, think the colour scheme is still fashionable... Typical male, didn't think I might need anything in the bedroom so I barely managed to grab a few items of clothing as he started moving and covering the furniture - in my befuddled 'I've only had one cuppa so far today' state I appear to have made some strange choices. It appears that today I am going commando. Still, I'm not expecting visitors.

I'm wittering because there isn't much on my desk. Here's the photo to prove it. And look at that sunshine. Will be outside a bit later I hope. 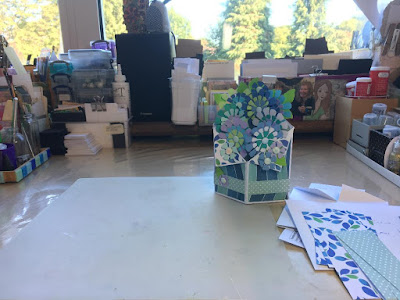 I'm very pleased with the tuxedo style card we did at craft class yesterday - yes I staged that. I think I'm going to repeat with my other group, even though we probably won't get to it till the new year. Also very pleased with that tidy backdrop on the windowsill.

I'll tell you why. I am an inveterate retainer of small pieces of card. I always think - oh that's too big to throw away (1.5 x 1.5 is about my limit) I could die cut a flower, stamp a sentiment ....... do I ever? Arriving home from class yesterday I was inexplicably depressed about the overflowing mess that was my scrap box and, despite many other more pressing concerns, sat and tidied it up, cutting things into sensibly sized rectangles and squares and ruthlessly discarding the rest (hubby will have a fit when he sees the recycling bin). But oh the fulfillment!! Am I the only one who finds mundane tasks like this to restore order so rewarding? I hate housework, but I do like my 'stuff' to be tidy. Shame I don't possess the gene (or discipline) to keep it that way.

Anyhoo, enough of that, why am I even here? Because it's Wednesday, when we snoop around crafty desks and catch up with their latest projects (and purchases - you know who you are). All this comes courtesy of the wonderful Julia Dunnit of Stamping Ground. Pop in and have a nose why don't ya.