What's on Your Workdesk Wednesday # 160

Every Wednesday blogland goes a little crazy and we all start nosing around each other's desks to see what's what. Well what's what is Wednesday comes round very quickly!! If you want to join in with this weeks WOYWW then hop on over to see its creator Julia Dunnit at her blog Stamping Ground - she's always good for a giggle!! 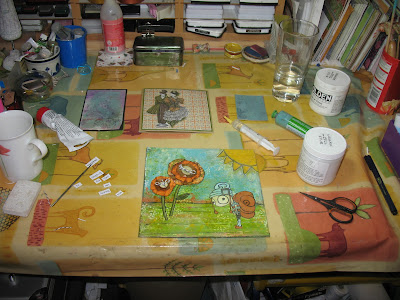 So here's mine, relatively tidy (!) with a couple of WIPs - and I really haven't staged this. No stamps or inkpads - I think that when I'm in the mood for stamping my tidy gene runs out the window!! I love this little canvas which I started a while ago, I think it's finished apart from some words and I'm dithering between 'Everyone has their own journey to make' and 'Everybody has their own road to travel'. Big difference huh? But I've already been dithering for over 24 hours. (Must learn to commit....).

This is a bit of a sneaky preview as I think this will be  next month's art draw/giveaway, we haven't had a canvas for a while. And while I'm on the subject the current draw has very few entries (see top right if you want to remedy that) and closes on Saturday.

I must also give a bit of an apology to those who left comments last week - I have to confess I didn't get to visit you all. I was working Wednesday till 8 and had a little family emergency when I got in which continued on to the next day, had to go out straight after work Friday, caught up a bit Saturday but did my handbag tutorial instead of visiting, burst pipe Saturday night, had to put up a fence panel Sunday and then the sun came out so we sat in the garden with a bottle of wine (well it might have been two) until it was time for the footie. Hopefully this week will be less traumatic and it is my last late night working on a Wednesday (yay!!) tomorrow so hopefully I won't have to make excuses in the future!! Happy WOYWW!!
Posted by My name is Cindy at 00:37

Beautiful canvas, Cindy, and a very tidy desk! I've got nothing at all to show on my desk today but am directing everyone to my workdesk at the craft show last Saturday instead!

Thanks for the nice comment, Cindy! I had fun doing the demos.

Ditto, beautiful canvas Cindy, I love the way you have everything set out so neat. You certainly had a lot going on didn't you but I'm sure all will fall into place.
The three ATC's are on their way to you, posted Monday.
Take care and happy crafting.
Cheers,
Elaine #33

Lovely canvas the colors are fantastic

some great pieces on your desk.
have a great week.
ps i have some nearly a year anniversary blog candy! trace x 58

Wonderful canvas, I love the colours.

Oh wow - I am loving that canvas and the colours are just wonderful!

Lovely tidy desk and the canvas is terrific. It looks like me as we don't have a car and I go everywhere with a rucksack on my bag lol

fab canvas , & what a challenging time you've had of things this last week. At least you got to sit down in the garden & chill on sunday. Happy crafting jill #73

Love that canvas too. Funny how inking and stamping just gets so exciting!I'm like that too. Tidiness goes out the window.What the heck!Who cares- nobody is looking are they! Those of us from WOYWW all understand.
Judy #82

Like your WIPs very much - I prefer 'the road to travel' version personally, though I can't explain why! Like all the colours on your desk this week, right up my street, lol!
Hugs, LLJ #3 xx

Hi Cindy, your canvas is so beautiful, I just love the colours you have used. If it was me I would go for the second quote (just in case it helps - lol). You have had a eventful week,haven't you, hopefully this one will be less hectic. Happy WOYWW, Anne x #57

Beautiful canvas. Thanks for letting us have a peep into your workspace today. Hope you have a good week. Hazel, WOYWW #27 x

a very neat desk! and i'm glad i still got to join the giveaway! happy WOYWW!
blessings and hugs from #24
peggy aplSEEDS

Great colours in your canvas. Thanks for sharing.

Lovely pieces on your desk this week! Thanks so much for sharing! I signed up to follow your blog this morning!
Glenda 107

Hi Cindy your canvas is gorgeous. I absolutely love it. What a cute little critter with his crumply shell. Hope you find the right words. WOYWW Hugs from Helen 89

your canvas is out of this world. enjoyed my visit have a great day

A tidy gene, see I knew I was missing something, cause I hate cleanning up after myself!! lol Now let's discuss the "footie" thing...what is that?..cause drinking wine and then footie just doesn't make sense to me unless you were getting a foot massage and heck, I think I'd fall asleep if I drank wine and then got a foot massage, sounds wonderful to me! lol waving the #49 from the hills of North Carolina :)

I like the "everyone has their own road to travel" version better. My hubby once pointed out that all those gorky romantic "reality" shows like Bachelor and Temptation Island have the participants talking about their personal journey, so now journey has become a joke word with us. Also, we don't watch those shows, so how do we know this?! But we do.... Anyway, I totally digress... love the works in progress on your desk. The canvas and the card above them are looking very cool.

Well i thought i had a busy week. Yours was none stop. the canvas is beautiful.

Oh, your canvas is looking really great! I love the colors you're using.

Your work desk is MUCH cleaner than mine! I have been looking for it all day..... think it is under the pile of card stock, markers, etc.... you know why I mean!
gorgeous canvas. Like the handbag tutorial too! :D
Hugs,
Marie XX

Cindy very tidy desk. Mine rarely looks that way. The canvas is so beautiful. I love the colors.

I am so inspired snooping on such creative desks.

You are so TIDY even after using all that paint to make a lovely canvas!
Have a great crafting week! HaPPy WoYwW!!
(((Lyn))) #32

happy woyww, Great canvas, I really like working on them, well the two Ive done anyway ;) sounds like you had a rather hectic week last week, hope things slow down for you this week. have fun, mark

Tidy, but I love canvas. How did you stay so need while using paings? #35

Belated Happy WOYWW wishes going your way. Thanks for visiting.

That canvas is lovely so cute. Sandy :)